The buildings and the art collection of the Flemish Parliament

Those who visit the Flemish Parliament will notice the numerous works of modern Flemish art. From the corridors, reception rooms, offices, committee rooms and the Dome Room to the entrance of the Speaker's office: there are works by Flemish artists everywhere.

The Flemish Parliament building was built in 1905. It was the architect Joseph Benoit who designed the Hôtel des Postes et de la Marine, commissioned by the national mail company De Post and the Marine Department. It would serve as the mail company's main building until 1987. In 1987 it was bought by the Flemish Council and renovated by the architects Willy Verstraete from Ghent and Jozef Fuyen from Antwerp.

The location of the former inner courtyard is now home to the Dome Room, where the plenary meetings are held. The glass dome of the Dome Room spans an area of 39 by 25 metres. The dome weighs 72 tonnes and is made up of 807 glass elements.

Furthermore, the building has ten committee rooms, a reading room (the Anna Bijns Room), a number of offices for the Speaker and the parliamentary administration, a break room (the Coffee House), reception rooms, a press room and work spaces for the press. Most offices are located in the adjacent House of the Flemish Representatives.

The House of the Flemish Representatives

The construction of the original building, as designed by architect Victor Bourgeois, lasted from 1937 to 1946.

The former Postcheque building has been converted into a modern administrative complex that complies with all modern-day functional requirements. Various elements of the building have been included in the conservation list of the Brussels Monuments and Landscapes Directorate due to their historical, technical and artistic value and have been meticulously restored. For instance, the building is one of the few Belgian buildings that still have a paternoster lift. This lift still works, but is no longer accessible for use. The artist Guillaume Bijl has placed dolls in it, thus converting it into a work of art.

"De Loketten" serves as a reception centre for the approximately 25,000 visitors received by the Flemish Parliament each year.

Art in the Flemish Parliament

Those who visit the Flemish Parliament will notice the numerous works of modern Flemish art.

On the one hand, there is the art collection, which is constantly expanded, and, on the other hand, there are the works of art integrated into the building and even into its surroundings.

21 contemporary Flemish artists have been given the opportunity to create a work of art for a space of their choice in the Flemish Parliament building. Often the artworks themselves underline the functionality of the spaces, but some also put parliamentary daily business in a different perspective or even add an ironic touch to it.

In addition, 5 artists have been given the opportunity to carry out an art project for the House of the Flemish Representatives. In 2002 Guillaume Bijl, Fred Eerdekens, Jozef Legrand, Joaquim Pereira Eires and Monique Thomas created a work of art both in various public spaces and around the building.

In the meantime, the art collection of the Flemish Parliament is still being expanded, following the advice of the Art and Culture Committee. The emphasis for new purchases is on work by young Flemish artists.

Slideshow: the art collection of the Flemish Parliament 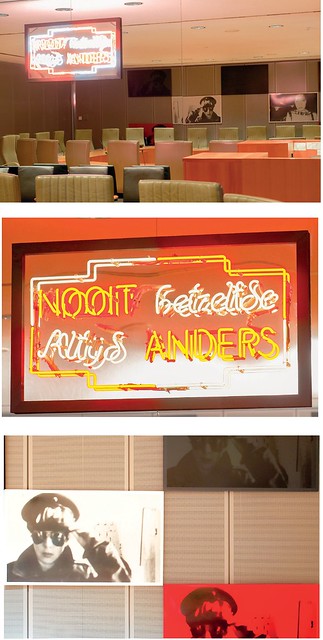